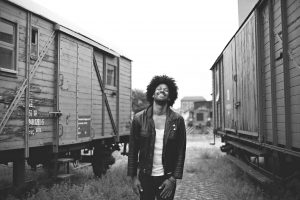 Frontman, singer, and songwriter, Daniel Dodd-Ellis began his professional performing career at Southwestern University’s Sarofim School of Fine Arts, where he studied Theater and Music. He went on to work as a theater performer and classical singer around the United States and Europe, including participation in the Young Artist Programs of New York City Opera and Austin Lyric Opera and performing the title role in Robert Wilson’s blues opera, The Temptation of St. Anthony.

After moving to and performing a while in Europe, Daniel eventually crossed over to popular music, singing with artists such as Marius Müller-Westernhagen in Germany. This connection to Warner Bros Label eventually led him to the prestigious Home Studios in Hamburg, Germany as a vocalist and songwriter. Ultimately, he formed his own acoustic soul quartet, the Upper East Side Band, in 2003, which has expanded to a six and seven-piece band in subsequent years. Rooted in gospel, soul and classical music, Daniel’s rich bass-baritone vocals have been inspiring audiences for over a decade.

Shortly after founding his band, he teamed up with soul music DJ, Daniel Dombrowe (a.k.a. DJ Dan D) for sessions and events in northern Germany. This eventually led to a long-standing friendship and to Daniel becoming the Master of Ceremonies of the Baltic Soul Weekender, one of Europe’s leading soul music festivals, founded by Dombrowe. Daniel released his first EP, Steppin‘ To You in 2009 and completed his (unreleased) second solo project, Souls Electrified, with Quinn McCarthy in 2014 at The Creamery Studios in New York. Other musical projects Daniel has worked on include a collaboration with electronic pioneer Burnt Friedman on 5 different albums and EPs, which include First Night Forever, Secret Rhythms (No. 5) and their trilogy Cease To Matter, released on Groove Attack label. Daniel is currently working with Sebastian Demarius (aka ComixXx) and Alexander Barck of the international collective, Jazzanova on new music for their upcoming album.